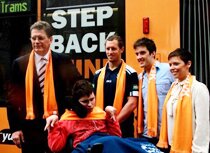 What is Step Back. THINK.’s mission?
The mission of Step Back. THINK. is to educate young people about the serious consequences one punch can have; and consequently reduce the number of serious injuries and fatalities that are too often the result of a fight.

What services does Step Back. THINK. provide?
Our main service is our education program which is presented to Victorian secondary schools. We are currently in the process of creating an online education tool which will help deliver our program to schools Australia-wide.

Step Back. THINK. is also launching our new intensive education model in which Step Back. THINK. will run half-day sessions with secondary school students to try and achieve real behaviour change.

The consequence of one punch, which caused James to fall backwards hitting his head on the pavement, was serious brain damage from which he will never recover.

The organisation was originally formed to keep James’ friends involved in his life. However, members of Step Back. THINK. continued to hear about the issue of youth violence and in the year after James’ assault two young lives were lost to a single punch.

Step Back. THINK. decided, that being young people themselves, they were the demographic that were both the perpetrator and the victim and therefore the message was best coming from them personally.

Step Back. THINK. will be rolling out our new education program, launching new competitions to engage young people and creating a bigger awareness campaign in conjunction with the Geelong Football Club.

From the Office of the Guardian for Children and Young People in South Australia, these tips on how those working with young people can best prepare for the time when the young people they work with move on.  Original article

Claire Moodie from the ABC talks to Tonya McCusker, wife of the WA govenor, about The Gathering, a DVD produced with the City of Melville on the subject of binge drinking. Original article

This report from the UK focusses on early intervention approaches shown to improve outcomes for children, young people and families. Original article

Sociability: social media for people with a disability

Anxiety Online is an online assessment and online treatment program for people 18 years and older. ReachOut Pro provides information and reviews of the service. Original article